Look what I found in New York City over Labor Day weekend!

Knightscope is preparing a store at 47th and Lexington in New York. 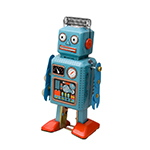